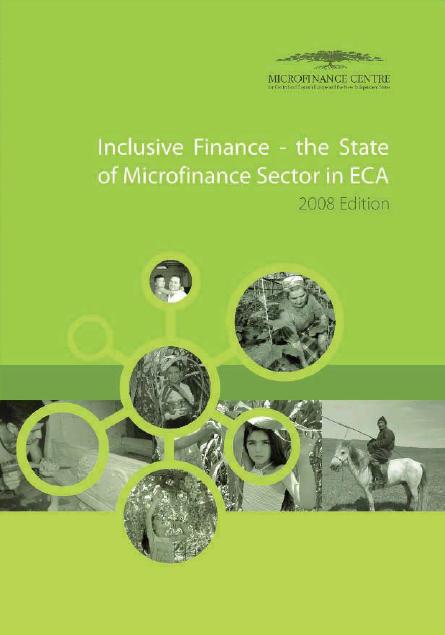 The Microfinance Centre has released a new publication on the level of financial inclusion in Eastern Europe and Central Asia. The publication is available for download here: Inclusive Finance – The State of Microfinance in ECA. 2008 Edition.
The topics covered include access to and use of various financial services, flows of remittances, market for microinsurance, supply of microcredit and saving services by MFIs at the end of 2007 and social performance of NGOs/NBFIs. Following is an overview of the paper (courtesy of the Microfinance Centre).
Access to Financial Services
In the ECA region physical accessibility of banking services varies from country to country. In European Union countries (New Member States), access to banking services is generally better with Hungary having the best bank branches penetration and Slovenia and Estonia the best distribution of ATMs among the population. Lithuania has the poorest outreach in terms of branches but makes up for it by the number of ATMs. Balkans and non-EU countries lag behind with banking sector penetration, except Croatia where access to bank branches and ATMs is better than in the majority of NMS-EU countries.
Use of Financial Services
According to World Bank assessments the use of services of financial intermediaries varies across the ECA region with the Western part (CEE and the Balkans) excelling over the Eastern part (Caucasus, Central Asia). The results of the MFC market surveys  carried out in 2005 -2007 supply similar results and confirm the higher use of banking services in the West of the ECA region.
International Remittances Flow
In 2007, officially recorded remittances to the ECA region amounted to over USD 53 billion, 30% more than a year earlier. In the total volume of world remittances, ECA transfers have a 15% share and constitute 20% of remittances received by developing countries. The rapid increase in the volume of transfers to ECA compared to the rest of the world has been observed for the last 7 years indicating the increasing importance of international inflows to these countries. Remittances measured as a percentage of balance of payments constitute 45% of GDP in Tajikistan, almost 40% in Moldova, and just below 20% in the Kyrgyz Republic.
Market Potential for Microinsurance
Between 2005 and 2006 the MFC together with the MicroInsurance Centre conducted a series of market studies in Azerbaijan, Georgia, Romania and Ukraine funded by KfW to discover the potential for microinsurance in these countries. The findings show that the use of insurance products, not only among low-income population but also among the better-off, is very limited and yet there is considerable demand for these products.
Supply of Microfinance Services
In 2007 the total loan portfolio of all microfinance institutions in ECA increased by 37% to reach over USD 14.7 billion. The growth was, however, slower than in previous years. NGOs/NBFIs had the highest growth rate among all institutional types – 83%. Of USD 7.3 billion of client deposits in the hands of deposit-collecting microfinance institutions over 70% was managed by credit unions.
Funding Structure of Microfinance Institutions
In 2007 NGOs/NBFIs more than doubled their funding base through borrowing from international investors and local commercial banks. Commercially-priced loans were the major funding source and growing in importance. Microfinance banks continued to fund their operations from deposits but, depending on the sub-region, borrowing from commercial investors also provided a significant share of assets, especially for smaller banks.
Social Performance of NGOs/NBFIs
Over half of institutions do not target low-income people and therefore do not have such statistics about their clients. In 2007, the percentage of the poor among the clients of NGOs/NBFIs was 12%. Only in the Balkans are low-income people overrepresented among NGOs/NBFIs clients but even so, the number of the poor among borrowers decreased from 38% to 25%.