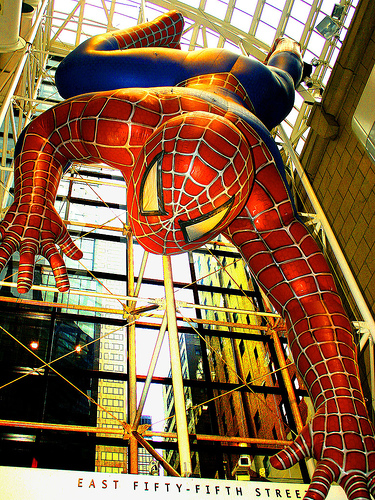 When I walked out of the movie theater after watching the first Spider-Man film, I never thought I’d hear Uncle Ben’s early advice to Peter Parker so many times in the years to come. However, every so often Hollywood manages to give us some food for thought, and the oft-quoted line, “With great power comes great responsibility,” continues to be applied to many real-life situations—even in microfinance.
Last Wednesday, microfinance expert Alex Silva came to the Center for Financial Inclusion to talk about Calmeadow’s most recent project: its paper on failures in microfinance in Latin America authored by Beatriz Marulanda, Lizbeth Fajury, Mariana Paredes, and Franz Gomez. The paper, available in both English and Spanish, covers 10 microfinance institutions that failed for various reasons. The purpose of this study was not to point a finger at failed MFIs, but rather to look at the underlying reasons why these failures occurred. As Mr. Silva asked, “Why did this happen? Weren’t we all watching?” Not examining why these institutions failed could make it all the more difficult to fix and prevent similar problems in the future.
One of the most important things to remember is that MFIs—like any financial institution—can and sometimes will fail. Accepting this fact may make it easier to assess the reasons for failure dispassionately.
In Mr. Silva’s opinion, the three most important things necessary for the success of an MFI are, in order: an enabling environment, governance, and management. Consequently, failed MFIs must ask themselves what they could have done differently in each of these areas. For example, could a highly competitive market push the institution to grow too rapidly, leading to methodology errors and, ultimately, fraud?
Another question is whether the MFI would have gone in a different direction if proper governance had been in place. Would those involved with the MFI have had a better understanding of the condition of their portfolio—the “nuts and bolts” of the organization? The lack of knowledge, or distortion of the reality of what is truly going on within an institution’s portfolio, can create complacency among decision makers until it is too late.
Mr. Silva observed that the majority of failures examined occurred with regulated MFIs. However, the regulation itself didn’t directly lead to the downfall of the institution. What caused failure was the fact that as regulated institutions, MFIs could leverage their balance sheets.  While leverage creates profits and enables growth, it also increases risk and vulnerability to shocks. Mr. Silva aptly illustrated this concept with the idea of two boxes balancing on a ledge, one taller than the other; the taller box is easier to push over.
So, where does Spider-Man fit into all this? We must remember that leverage in and of itself is not a bad thing—however, it is something that must be handled with great responsibility. The more power a microfinance institution holds—in essence, how highly leveraged it is—the more responsibility is required to remain successful.
Note: The Center for Financial Inclusion is now taking the failures project global with a companion study covering regions beyond Latin America.  It will be available in early 2011.
Flickr credit: natalie’s new york