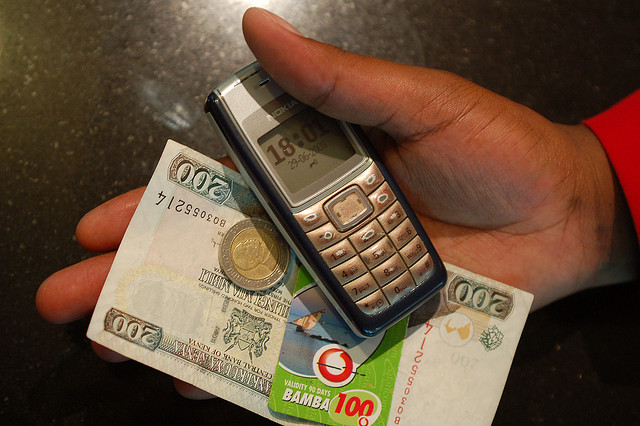 It’s easy to share Thomas Friedman’s excitement about India’s fast-expanding branchless banking sector. It’s hard not to like EKO India Financial Services, the “typical Indian start-up” he describes in his New York Times piece “Do Believe the Hype.” Eko’s 18-month-old branchless bank now has 180,000 users, mostly poor maids and migrant workers, served by 500 cellphone-based “branches” centered on mom-and-pop kiosks.
Most of these clients, we can safely presume, were formerly financially excluded. One of the most remarkable things about the way Eko has begun to make them included is the fact that their project is no financial titan’s brainchild; rather, it’s a “garage-based” start-up in the Silicon Valley mold.
I do believe Friedman’s hype about branchless banking, but for different reasons than the garage-launch.  What I love about Eko is that it’s a business model grounded in user-centered design, which is so rare in most technology companies trying to serve the base of the pyramid.
It’s not the first attempt to move beyond bricks & mortar in India: the RBI’s 2006 legislation on correspondent banking allowed innovation to flourish, noting the importance of having an enabling regulatory environment.
Eko’s predecessors have active users that numbers in the millions, but a higher percentage of Eko’s 180,000 users are active (i.e., they transact at least once per month). Client utilization is a key performance indicator we use at Frontier Investments – an impact investing fund sponsored by ACCION International that promotes financial inclusion.
But how do Eko’s 180,000 clients compare to the millions of users Kenya’s M-pesa solution has mobilized with its innovative mobile banking platform?  Or to GloboKas, a technology agnostic point-of-sale platform, which has one-fourth as many users as EKO, roughly the same amount of transactions, and twice the revenue?  Productivity – how efficiently agents are able to serve clients and process transactions – is another key performance metric that Frontier tracks. It allows us to make sure that the payment solution is providing a real value offer to its clients and will reach sustainability and scale.
Eko is a great company, and its founders, Abishek Sinha and his brother Abhinav, are visionaries who – along with the other interesting payment systems serving the base of the pyramid across the globe – will fundamentally change how we think about delivering financial services to the poor.
But a word of caution is in order here. For these entrepreneurs to succeed, we need to be promoting sound regulatory frameworks and user-centered approaches. In that regard, I would direct readers’ attention more to the Philippines and Peru than India (for regulatory models), as well as Jan Chipchase’s blog or Menekse Genser’s m-pay connect for user-centered design.
For more information, sign up for updates from the Financial Inclusion 2020 campaign.
Flickr credit: whiteafrican

The Case for a Gender-Intelligent Approach: An Opportunity for Inclusive Fintechs

Agility Breeds Resilience: A Tale of Two Fintechs Innovating in the Face of a Pandemic

Telling a Human Story of Tech in Agent Networks