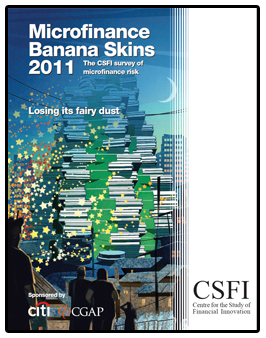 The Microfinance Banana Skins report, now in its third year, reflects changing perceptions of risk in a dynamic and fast-moving industry. This year’s report shows that microfinance has come of age, and with that, new issues have arisen. In an increasing number of markets, the rapid rate of growth and outreach means that microfinance is confronting the same forces of competition, credit cycles, and consolidation seen in other sectors.
This survey explores the risks facing the microfinance industry at a time when hard questions are being asked about its future, prompted by growing doubts about its effectiveness as a source of small-scale finance for the poor.
One of the respondents summed up the significance of these doubts, saying they could “dissipate the fairy dust that has historically coated everything related to microfinance.” Many of the risks explored in this report reach the heart of the debate about where microfinance goes next.
For the third year in a row, the Council of Microfinance Equity Funds served as one of four members of the Banana Skins Steering Committee.  The Council, represented by Deborah Drake, played a significant role in providing input to the survey’s design and content, compiling and expanding the list of survey participants, and planning the dissemination of the report. The report’s findings will be discussed at a series of roundtables to be held in different regions throughout the year.
The survey was conducted by the Centre for the Study of Financial Innovation (CSFI) and sponsored by Citi and the Consultative Group to Assist the Poor (CGAP) with support from the Council.