Senior Fellow Paul Rippey and Program Manager David Levai are currently in Mali identifying the results of an initial test of the Energy Links firefly LED lamp. Here Paul describes his initial observations from Mali. To learn more about Energy Links and the earlier pilot project in Uganda, click here > 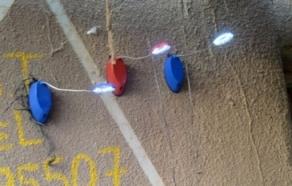 Just as in Uganda, the ladies in Mali loved the lamps. But I think they were even more transformative here than in Uganda. In Uganda, we found that people were changing their lighting source from terrible to better. Here, the lantern often makes the difference between being in the dark, and having some light. Almost in every case, the principal users of the lights in the evening were children, studying. But the light would be passed around: first the family eats with it, then the kids study with it, then the adults take it to their room, then in the morning, Mom uses it to get up and make breakfast. Sometimes there was business use included – someone selling or making something in the evening.
There were several cases of shared lighting that we didn’t see in Uganda: in one case (in the picture) three families keep their lights together and light up an area where all the kids can study at night, essentially centralizing something that we had decentralized. In another, they had a wake for someone who had died and used the lights in a relay, turning one on when another had gone dim. I salute the collective intelligence of rural people!