Making Something From Nothing: Biomass Briquettes Bring Fuel and Business Options

> Posted by David Levai
I’m on my way back from Uganda where I spent the last week working for the Energy Links project. Together with the Legacy Foundation, we were supporting a workshop to train members of a local NGO, UWESO (Ugandan Women’s Effort to Save Orphans) to produce biomass briquettes. 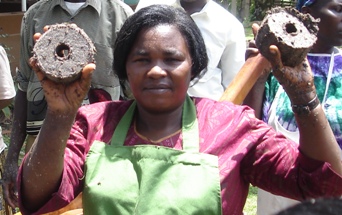 Biomass briquettes made by this Ugandan community

What on earth is a biomass briquette you might say?” – a reaction which happened to be mine when I first heard about it. It’s a type of solid cooking fuel made out of organic waste material. With its round shape and a hollow core, it looks like a donut. So, what makes it so important? It is an environmentally friendly alternative to charcoal and a cheaper substitute for the billions of households that cook their meals everyday using the inefficient combustion of charcoal or firewood.
In the developing world today, charcoal and firewood are the primary cooking fuels. But as forests shrink and as the prices of raw materials and energy keep rising, cooking fuel expenses are a growing burden on low-income households in developing countries, monopolizing on average 8% of a family income, much more than in western countries. Just imagine an average U.S. household with a monthly cooking (cooking only – not heating or lighting) bill of over $300!
By definition, producing charcoal requires wood, which increases both deforestation and the stress on ecosystems, emits large amounts of CO2 in the process and regularly ends up burning down entire chunks of forests. And apparently 10% to 20% of that very charcoal is lost in dust and fines along the distribution process. What a waste!
Therefore on top of protecting the environment, the advantages of biomass briquettes are threefold: 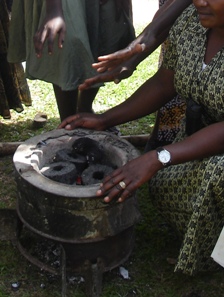 The latest in cooking fuels - biomass briquettes made from yesterday's "trash"

Thus, mastering the briquette-making technique and having access to credit are the both the requirements for this activity but also the enabler to a fundamental change at the country level through small-scale entrepreneurship. The scale of production is very small, and in order to replace charcoal a large number of producers and entrepreneurs are needed to flood the market with briquettes. Thus there is room for job creation.
Together with the Legacy Foundation – whose promotion, training of producers, and research of technological improvements worldwide spans two decades – the Center for Financial Inclusion’s Energy Links project organized this five-day workshop last week to train 30 individuals on how to make biomass briquettes and share this expertise in their communities. The participants were community leaders, trainers, and organizers from all around the country selected by our partner UWESO, a local NGO, which, among other programs, organizes savings groups. These savings groups, with a total membership of around 75,000, are a decisive channel to promote the knowledge about biomass briquette and help kick-start the activity.
Most participants had never heard about briquettes before and became really enthusiastic when they realized the economic and social impacts this activity can have on their family or their community. The purpose of this training was ultimately:

But at the end of this inspirational week, one unknown remains: how many of the workshop participants will actually start a briquette making business when they go back to their village?  How many will take the time and the effort to explain the advantages of briquettes and train members of their community? Even though most participants ensured me of their desire to take on this activity and advance briquettes in Uganda, only further monitoring in three to six months will help us determine if the workshop was actually successful in achieving organic replication of this business model.