> Posted by Kelley Mesa
Elisabeth Rhyne’s op-ed ran in today’s New York Times “Dealbook.” A permanent link to the article may be found below.
Another View: A Local Fix for a Global Mess
Many of the participants at the World Economic Forum will be thinking about big, global solutions to the current financial mess. But should they also be thinking small?
With the conference set to begin, Elisabeth Rhyne, managing director of the Center for Financial Inclusion at Acción International, argues that the seeds of a more sustainable global finance industry might be found in microfinance, in which local lenders provide very small business loans and other financial services. Acción is a Boston-based nongovernmental organization that helps build microcredit institutions and gives them technical assistance.
Her view adds to what is bound to be a vigorous debate here in Davos about how to mend the world’s tattered financial system — and at what level the fix should be applied.
In many cases, Ms. Rhyne suggests, the creation of global financial behemoths eclipsed the kind of “relationship banking” that leads to prudent lending. Microlending, by contrast, is a highly personal business, and microlenders do not offload their loans to others after they have been made, she says, leading to a portfolio quality “that might make many mainstream bankers envious.”
We present her opinion piece, below the jump, as more grist for the mill as Davos gets under way.

Toward a “Distributed” Global Banking Grid
by Elisabeth Rhyne 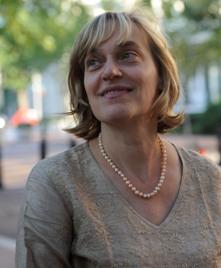 In a rather remarkable collective mea culpa, the G-20 leaders, following their emergency summit in November, issued a joint diagnosis of “the roots of the current crisis” in world financial markets:
“Market participants sought higher yields without an adequate appreciation of the risks and failed to exercise proper due diligence. At the same time, weak underwriting standards, unsound risk management practices, increasingly complex and opaque financial products, and consequent excessive leverage combined to create vulnerabilities in the system.”
Now that the ‘vulnerable system’ has imploded, it’s natural to seek out any seeds of sustainable reconstruction. One of the seeds is microfinance, the provision of very small business loans and other financial services to the self-employed poor worldwide. Microfinance offers a refreshing contrast on many fronts with the practices criticized in the G-20 report.
For years, world capital markets pursued profit through leverage and efficiency — but at the same time, lost sight of accountability and risk diversification. Global financial institutions created structures that moved money around at lightning speed. The world financial grid, with its warp of securitizations and its woof of derivative contracts, proved akin to an overly centralized energy grid that crashes when overloaded. When the high voltage transmission lines went down, the whole system crashed.
A more durable approach could resemble a financial microgrid, with self-sufficient local power centers, drawing capital from local communities. These distributed financial centers would not be walled off from each other, but neither would they depend on the mainline current. Microfinance institutions (MFIs) would feature prominently in a financial microgrid.
In marked contrast to subprime lending in the U.S., microfinance institutions around the world follow the traditional principles of relationship banking. Developed as a means of helping the poor lift themselves out of poverty, MFIs around the world, from BancoSol in Bolivia to Bank Rakyat Indonesia, pioneered techniques that make lending simultaneously socially responsible and financially viable. These include character-based lending; stepped lending, where prompt repayment is rewarded with gradually larger loans; and group lending, where borrowers cross-guarantee each others’ loans.
MFIs approve loans based on face to face assessment of a customer’s ability to repay from existing income — not speculation on future asset value. Insulated in most cases from their countries’ formal economies, MFI clients — the self-employed poor — have proved resilient in previous crises. MFIs, for their part, remain well-grounded because they keep their loans on their own books rather than passing off risks to others who may not understand the market so well.
The resulting portfolio quality might make many mainstream bankers envious. Of the 890 MFIs reporting to the Microfinance Information Exchange, a benchmarking data source, the median loan loss rate in 2007 was 1 percent, and 75 percent of all MFIs had loan losses below 3.3 percent.
The freeze-up in capital markets does pose a challenge to the ambitious growth targets of the world microfinance community, which seeks eventually to reach all of the poor people worldwide who could profit by access to financial services. That’s why the global pullback is sending many MFIs to domestic credit markets and the mobilization of savings deposits to fund their growth. Savings, in concert with access to responsible lending, provide the working poor with a powerful one-two punch in the struggle to rise above a precarious existence.
Institutions like MFIs that grow through savings accounts and domestic capital markets while offering responsible lending could be the basis for a distributed, diversified and durable financial system. Community banking in developed countries offers another illustration of such a model. In the U.S. today, according to FDIC data, the failure rate among big banks is eight times greater than among small ones. Relationship banking in the U.S. still exists, and it’s poised for a comeback as the benefits of preserving mutual interest between lender and borrower once more become obvious.
A return to a banking microgrid, in which each institution operates a locally-grounded business, could help stabilize markets in many countries. This shift in focus could have a major side benefit of bringing the practices pioneered by MFIs to reach more of the people further down the economic ladder with financial services.
Financial institutions that grow their lending capacity organically through savings deposits and practice traditional relationship banking build on a solid foundation. A durable world banking system with more nodes will be well-equipped to stimulate economic growth from the ground up.
http://dealbook.blogs.nytimes.com/2009/01/27/another-view-a-local-fix-for-a-global-mess/