Portfolios of the Poor 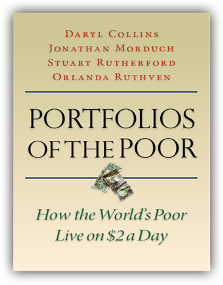 Billions of people around the world live on less than $2 a day—an amount most of us could likely dig out of our couch cushions. It’s hard to imagine what it would be like to scrape by on so small an income:  how would you put food on the table, keep a roof over your head, plan for medical emergencies, or save for retirement?
A new book that I co-authored with Daryl Collins, Stuart Rutherford and Orlanda Ruthven tackles these fundamental questions. Portfolios of the Poor: How the World’s Poor Live on $2 a Day grew out of the sense that there’s lots of talk these days about global poverty, but we don’t often hear the ideas and strategies of the poor themselves.

The book began with a simple plan to listen and learn. In 1999 Stuart spent a year tracking the spending habits and financial lives of residents of the Dhaka slums where he works with SafeSave, the Bangladesh microbank he founded.  He made biweekly visits to select families and recorded “diaries” that tracked–penny by penny­–how these families managed their money. Most residents lived on less than $2 a day and earned their livings through a patchwork of odd jobs and self-employment activities. Yet Stuart’s diaries revealed that rather than a hand-to-mouth existence, these families borrowed and saved with an eye towards the future.

As a research strategy, why create financial diaries instead of using another tried-and-true research method? We realized that existing empirical approaches were good most of the time – but not all the time. On one end of the spectrum, nationally representative economic surveys (like those run by governments and the World Bank) offer limited insight into how the poor actually live their lives week by week. On the other side, small-scale anthropological studies examine behavior more closely but don’t provide the economic and financial focus at the heart of our questions. The financial diaries are a half-way house.  They’re systematic in terms of economic data collection (especially in Daryl Collins’s work in South Africa) but capture the texture and complexity of people’s lives—the intimate details easy to miss in a one-time interview.

Inspired by Stuart’s work, Orlanda Ruthven took the idea to India, and Daryl Collins extended the approach in South Africa. Their findings echoed those in Bangladesh: everywhere the researchers went, they found that once they looked closely, members of the “bottom billion” were living active financial lives, not despite being poor, but because of it. In all three countries, families stretched their incomes and juggled a handful of financial relationships in an attempt to deal with the “triple whammy” of poverty:  low incomes, unpredictable incomes, and a lack of financial tools to help them make the most of their limited resources.

Hamid and Khadeja are a Bangladeshi couple living in the Dhaka slums. Despite their meager income of $70 per month, Hamid and Khadeja are active money managers. A first interview with them would yield a short list of the formal financial tools they used: a microfinance loan, a savings account, and an insurance policy. But after several follow-up visits, researchers were able to pick up ten other financial tools and relationships that Hamid and Khadeja use to make ends meet, such as remittances to their home village, shopkeeper credit, wage advances, a loan to their neighbor, and a use of a moneyguard.  A one-time survey would have missed it all.

Sometimes the strategies succeeded, and other times they failed completely. But even their failures provide lessons for innovation.  Portfolios of the Poor concludes with concrete priorities for moving forward on the financial access agenda.  They include broadening the scope of microfinance to deliver loans for general purposes and enabling savings and simple risk-coping tools, like insurance – but especially short-term emergency loans.  Some of these ideas are being tested and extended by researchers at the Financial Access Initiative.

The Center for Financial Inclusion is pushing forward on another important tool to fight poverty:  a focus on meaningful consumer protections, including transparent pricing and measures to avoid over-indebtedness.  It’s a powerful agenda, especially when coupled with expanding access to better financial tools to turn ideas into action.

Jonathan Morduch is a Professor of Public Policy and Economics at New York University and a member of the Center for Financial Inclusion’s Advisory Council.

Accountability for Algorithms: A Balancing Act for Governments

Top 10 of 2021: CFI Research that Furthered Our Thinking in a Pivotal Year