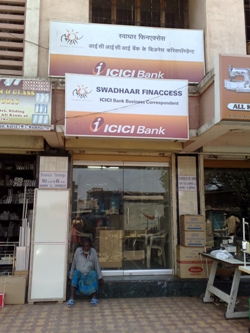 The Oscar-winning movie Slumdog Millionaire is a fictional account of one teenager’s tough life in the slums of Mumbai to eventually winning the jackpot of a TV game show.   But would young Jamal spend all those rupees or open a savings account to keep them safe?

Through ACCION’s support of its microfinance partner Swadhaar FinAccess on Alternative Channels, I have had the opportunity a few times to walk around some of Mumbai’s slums – Kurla, Malad, and Dharavi (Asia’s largest) – and observe first-hand conditions there and poor people’s savings patterns.  As an NGO, Swadhaar FinAccess is not regulated to offer savings accounts but wanted to offer the “service” to its poor clientele.  So in January 2008 it struck a banking-correspondent agreement with ICICI, India’s largest private bank, where it would set up, staff, and manage small “kiosks” (see picture at right) in the poorer neighborhoods of Mumbai. Through these kiosks, clients can open ICICI savings accounts and make basic transactions, such as balance inquiries, deposits, and withdrawals.  While these special savings accounts designed by ICICI have fewer options than regular savings accounts, apart from a 200 rupee ($4 USD) smart-card purchase to open the account, they charge nothing for transactions and come with few restrictions (e.g., no minimum balance, less documentation to open an account).   In return, Swadhaar receives a commission from ICICI for the number of new accounts opened, total average balance, and transaction volume.

When I started analyzing the actual performance behavior of the accounts last summer, Swadhaar FinAccess was operating four kiosks through which the client growth had been rather respectable at nearly 3,000 customers. What surprised me, though, was that we found anywhere from 75% to 93% of the accounts were not carrying any balance, and roughly 63% of customers had never made a single transaction.  When asked, ICICI said those figures were around the average for the 120,000 savings customers acquired through its banking correspondent network of 40 NGOs.  That got us thinking: why would so many poor people spend a hard-earned 200 rupees for the smart card to open the account, only to rarely or never use it?

Why, indeed. Through focus groups of Swadhaar FinAccess savings customers, we uncovered a number of reasons for this behavior.  Among those who carried a balance, their decisions to open an account stemmed from their impression of the ICICI brand, and its association with “glamour” and the “middle-class.”  For this group, the ICICI name also provided a sense of security – one of the most important features in promoting savings – specifically using the metaphor of the bank being a father-figure that “would help if his children [the customers] ever got in trouble.”

But what about the customers who carried no balance? Their revealing response: the smart card, complete with their name, thumbprint, and photo, acted as a identify card, and when combined with the adored ICICI logo, one that commanded respect. India does not have a national ID card. The smart card, in effect, provided them with an identity. We received comments like, “I just like to show that I have an account, it doesn’t matter if I have a balance or not” and “If you are going at night and you clash the police then you can show them this also.”

These comments reveal that a sense of dignity and self-respect were the unintended benefit of the bank cards, and therefore, well worth the 200 rupees for many clients.  This finding underlines the importance of treating clients ethically and helping them understand their rights and responsibilities with financial institutions, an idea currently being promoted through the Center’s Campaign for Client Protection.  Swadhaar FinAccess is interested in the role of consumer protection in its operations and is working with the Center to learn more about the 6 principles of client protection and how to enhance their role in current operations.

Using these findings, Swadhaar FinAccess, with ACCION’s support, is undertaking several marketing activities to increase overall usage of the savings account, as well as implementing client education programs courtesy of the Dell Foundation.  Stay tuned in the coming weeks when I will write more broadly about product usage in alternative channels (banking agents, mobile banking, debit cards) and how this affects both the social and financial bottom-line of MFIs.

Amitabh Saxena is the Director of Alternative Channels at ACCION International.