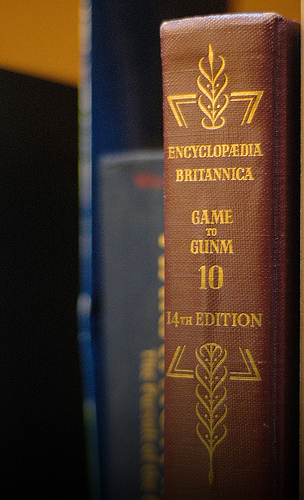 My first job out of college in the seventies was selling Encyclopedia Britannica in Connecticut. After a week’s office based training where I learned from oracles on the sales force how to “build the four walls around the customer so they {the customer} can’t get out,” I gamely popped a mint in my mouth and began to ring door bells of my prospective quarry. (None of these were the dreaded “cold calls”: interest had been signaled via phone solicitation or by the filling out of a newspaper insert.)
It quickly became apparent that I had no talent for convincing my would be customers in middle class neighborhoods to buy the premium set with luxury binding which would earn me a healthy commission as opposed to the economy edition in faux leather,  which would earn me peanuts.   In fact, I was lucky to get my foot in the door, let alone erect even one of the four walls on the road to commission heaven.  Indeed, it became increasingly apparent that the middle class were reluctant to buy from a door to door salesman—when they wanted a product, they went out and shopped around for it on their own terms.  It was reassuring to find out that it wasn’t only a novice salesman like me who suffered at the hands of the middle class.  Even the legends of the sales force encountered resistance from these quarters.
So where did the commissions come from that kept the Britannica sales force in clover? I found out when I visited a poor black neighborhood in New Haven, Connecticut.  In a rundown public housing project that had the charm and livability of a Dickensian era factory complex, I knocked on the door of a small unit next to a urine soaked stairwell.  It was answered by a young woman with two children.  The apartment was eerily vacant except for the most basic necessities.  The young mother welcomed me like an honored guest. She listened with rapt attention to my pitch about the virtues of this repository of the world’s knowledge–and lo and behold the four walls went up with a predestined kind of textbook perfection.
Why? My guess is that the encyclopedia held out the promise of a bright future for her children, which would only grow brighter with the luxury binding and other enhancements that came with the premium package.   She thought that the man in the suit (me) was an emissary from another, better America who would change her children’s destinies. (I thought he was a despicable conman for pushing a premium package on someone who seemed to be living precariously close to the edge.) Guilt stricken, I begged her to reconsider and go for the stripped down economy package since, as I assured her, the words on the pages were identical and would cost her $500.00 less. But she was adamant and signed the contract.
It turned out that in the Eastern region, the sales force’s most successful community was Roxbury Mass, one of the poorest communities in greater Boston.  Why was this? Part of the answer may be what I call the “Honored Guest Phenomenon,” which I experienced firsthand.  In a community where the only white people who came to the door were social workers, parole officers or bill collectors it was uplifting to have a visitor who saw you as a future customer and human being of worth.
So what are the implications of my autobiographical case on developing consumer protection guidelines for microfinance institutions (MFIs) and their staffs? Embedded in a loan agreement for some clients may be the magical belief that a powerful stranger, the loan officer, can somehow transform their lives. MFIs that understand the sociological reality that vulnerable populations may have a special susceptibility to the persuasiveness of “the honored guest” will take measures to counter the illusion whenever possible. In so doing so, they protect a poor person from unintentional victimization and themselves from another loan going into arrears.
Flickr credit: CarbonNYC