Including Women Customers in “Inclusive Fintech”

New data helps to inform ways in which inclusive fintechs can advance women’s financial inclusion by tackling the gender gap in their customer base.

This is the second part of CFI’s blog series exploring 2019 data from Inclusive Fintech 50 and Results of the Fintech Benchmarks Proof-of-Concept to shed light on current gender disparities in the fintech industry — both at the management level and in their customer base. This blog post focuses on the role fintechs can play in designing products with women in mind, and thus help to close the gender gap in financial inclusion. It is structured around two broad observations and concludes with several recommendations for fintechs and researchers.

1. There is a gender gap in the customer base served by fintechs

The median fintech had only 36 percent female customers.

The Inclusive Fintech Benchmarks data reveals a gender gap in the customer base served by inclusive fintechs. Given the social aim of these fintechs, gathering critical demographic information is paramount to product design and meeting customer needs. However, only 20 out of 45 fintechs recorded sex-disaggregated data on their customer base. Among these 20 fintechs, the median fintech had only 36 percent female customers. This again drives home the need for such data, in particular to understand whether women were specifically targeted, and if so, which strategies were most effective. And if women were not specifically targeted, it would also be useful to understand how these female customers were attracted in the first place.

However, mobile money has the potential to narrow the gender gap in financial inclusion. An analysis of the Findex 2017 data by GSMA finds that countries with high mobile money usage have indeed narrowed the gender gap in financial inclusion. By transacting digitally, women do not need to travel to inconvenient locations or where they feel unsafe, and they can make payments securely and privately. A study conducted on the International Rescue Committee’s (IRC) mobile money cash-aid programs in rural Sindh, Pakistan found that IRC’s consistent financial and digital literacy trainings played a crucial role. Female clients were not only able to use mobile money to receive their cash-aid, but appreciated the convenience, privacy and speed of mobile money.

Globally, however, women are still 33 percent less likely than men to own a mobile money account, mainly attributed to lower rates of mobile phone ownership and lack of access to identity documents. Some state governments in India, for example, have initiated programs to subsidize phone ownership, which helps to address the access gap but not the usage gap. Efforts to overcome women’s barriers to accessing financial services need to be coordinated, recognizing that women are not a homogenous group or customer segment. Fintechs are uniquely positioned to help close the gender gap in financial inclusion while also serving an untapped market that represents a large potential revenue source.

2. Female-led fintechs are more likely to target female clients and other underserved populations

Diverse organizational leadership provides numerous benefits. For fintechs, female leaders can play a pivotal role in designing and marketing financial products to meet the needs of women. Although female-led and non-female-led fintechs in the Inclusive Fintech 50 2019 data target broadly defined “underserved” customers at similar rates, female-led fintechs are more likely to support micro, small, and medium enterprises (MSMEs), as well as farmers and rural households. Fintechs that do not have women in leadership positions are more likely to instead target their products to the general public, which may not produce as great an impact on financial inclusion. 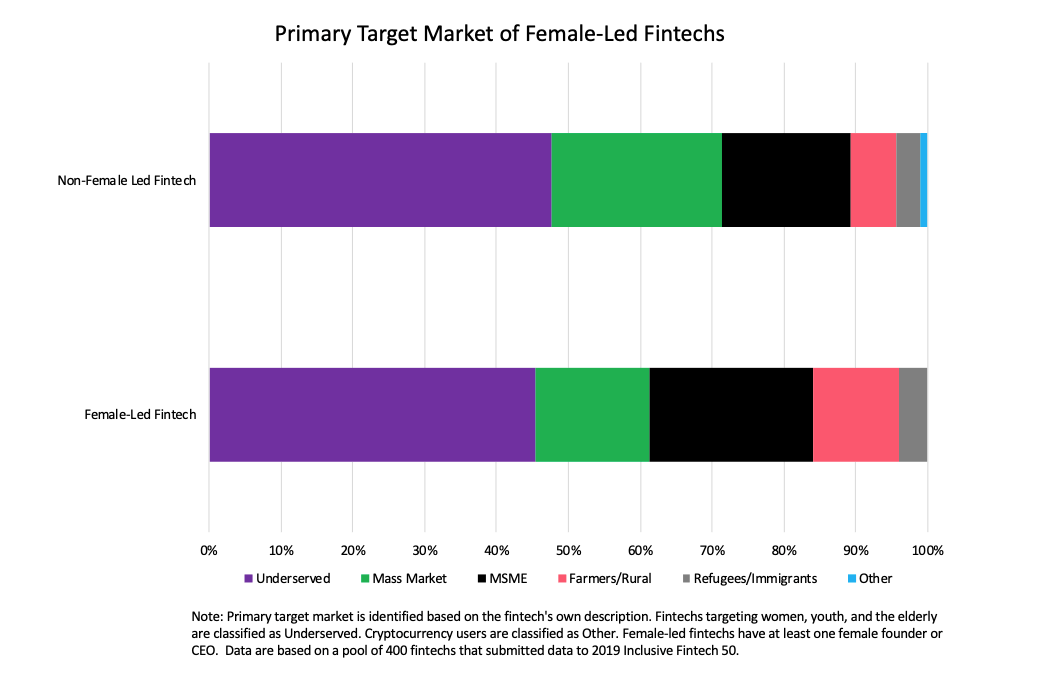 Additionally, segmenting and targeting more female customers represents a market growth opportunity for fintechs. Much like sex-disaggregated client data, segmentation also forces providers to understand the specific needs of their target customers and the unique barriers they face. For instance, JazzCash Pakistan wanted to understand how to improve women’s mobile wallet usage. In exploring this, their research partners, Women’s World Banking and ideas42, found that female and male customers used JazzCash accounts in very similar ways and that the real problem was not usage but acquisition. Female customers accounted for only 15% of new account openings, likely due to marketing campaigns aimed at men. With further research, the team was able to design solutions to accelerate the acquisition of new female customers.

We are excited to delve deeper into the 2020 Inclusive Fintech 50 data to answer some of the questions we were not able to answer based on the 2019 data here. Nevertheless, this two-part blog post has highlighted several important ways in which advancing women’s inclusion in the fintech space, both at the leadership level and among the customer base, is not only the right thing to do, but also the smart thing to do.

Accountability for Algorithms: A Balancing Act for Governments

Top 10 of 2021: CFI Research that Furthered Our Thinking in a Pivotal Year