CFI reflects on findings that excite us from the latest Global Findex and what we can focus on next that will help us rethink financial inclusion.

When World Bank President David Malpass opened the Global Findex Launch event on June 29, he mentioned that giving people bank accounts – the key metric used to measure financial inclusion – “is not the lowest cost way of providing financial services,” and that the focus of financial inclusion should instead be on promoting higher transaction volumes and affordability of financial services. Malpass said, “In an ideal world […], you want to have billions of transactions but have the cost be a tiny fraction of a cent.”

Malpass’ remarks point to the long-standing effort among the inclusive finance community to revise its target metrics beyond access. On one hand, as Malpass pointed out, accounts are expensive and many low-income consumers prefer to transact through digital payments services without opening formal bank accounts. Moreover, among those who do have bank accounts, dormancy levels are high. Accion’s CEO Michael Schlein pointed out that in addition to the 1.4 billion people excluded from the financial system, there are also 400 million people worldwide who are underserved, meaning they have opened accounts but never use them.

1.4 billion people are excluded from the financial system, but there are also 400 million people worldwide who are underserved.

Every Global Findex release – this is the fourth in 11 years – is a moment of reckoning for the inclusive finance community. The 2021 results show where progress has been made in areas that seemed unachievable just a few years back – from Africa’s leapfrog into digital financial services to the narrowing gender gap. The World Bank Findex team also introduced new and enhanced indicators on financial resilience and financial “worrying” that, despite their limitations, are important additions and signal interest in richer and more meaningful metrics to evaluate consumer outcomes. Below are four findings that excite us and two suggestions on what we’d like to see in the next Findex.

1   Account Ownership Has Expanded to Record Levels in Africa, While the Arab World and South Asia Have Stagnated

Between 2011 and 2021, global account ownership grew by 50 percent from 51 to 76 percent. This indicator grew at a higher growth rate (71 percent) in developing economies, increasing from 42 to 71 percent, which shows that many previously unbanked populations have since gained access to the financial system. 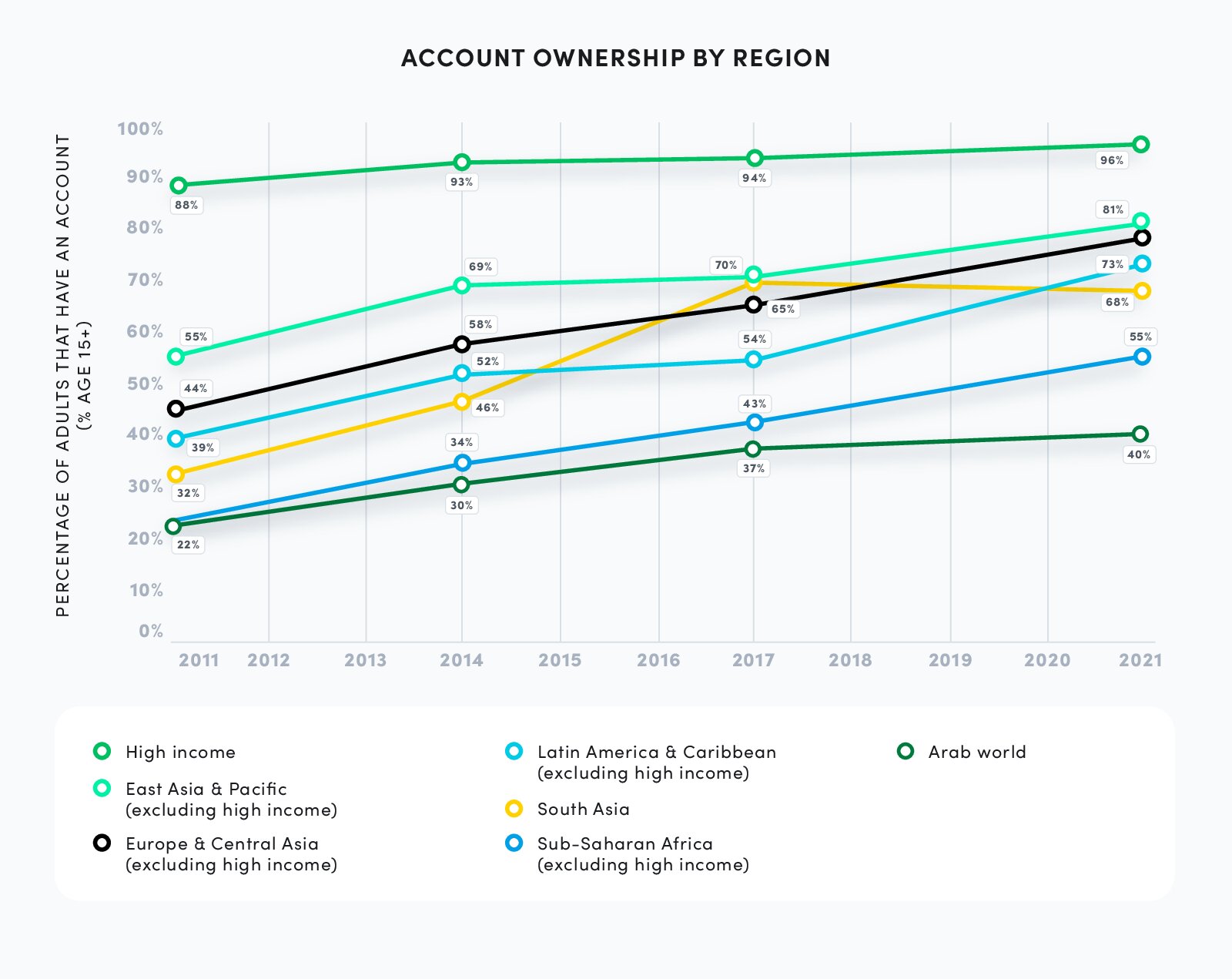 2  Account Dormancy Continues to Be Significant in South Asia

After the 2017 Findex release, CFI pointed out that a very large share of accounts were unutilized. Although the definition of inactive accounts has changed in the 2021 Findex to now include “not making any payments” in addition to “not making deposits and withdrawals”, the figure remains high: more than 400 million people globally have an open account but have not used it for over 12 months. 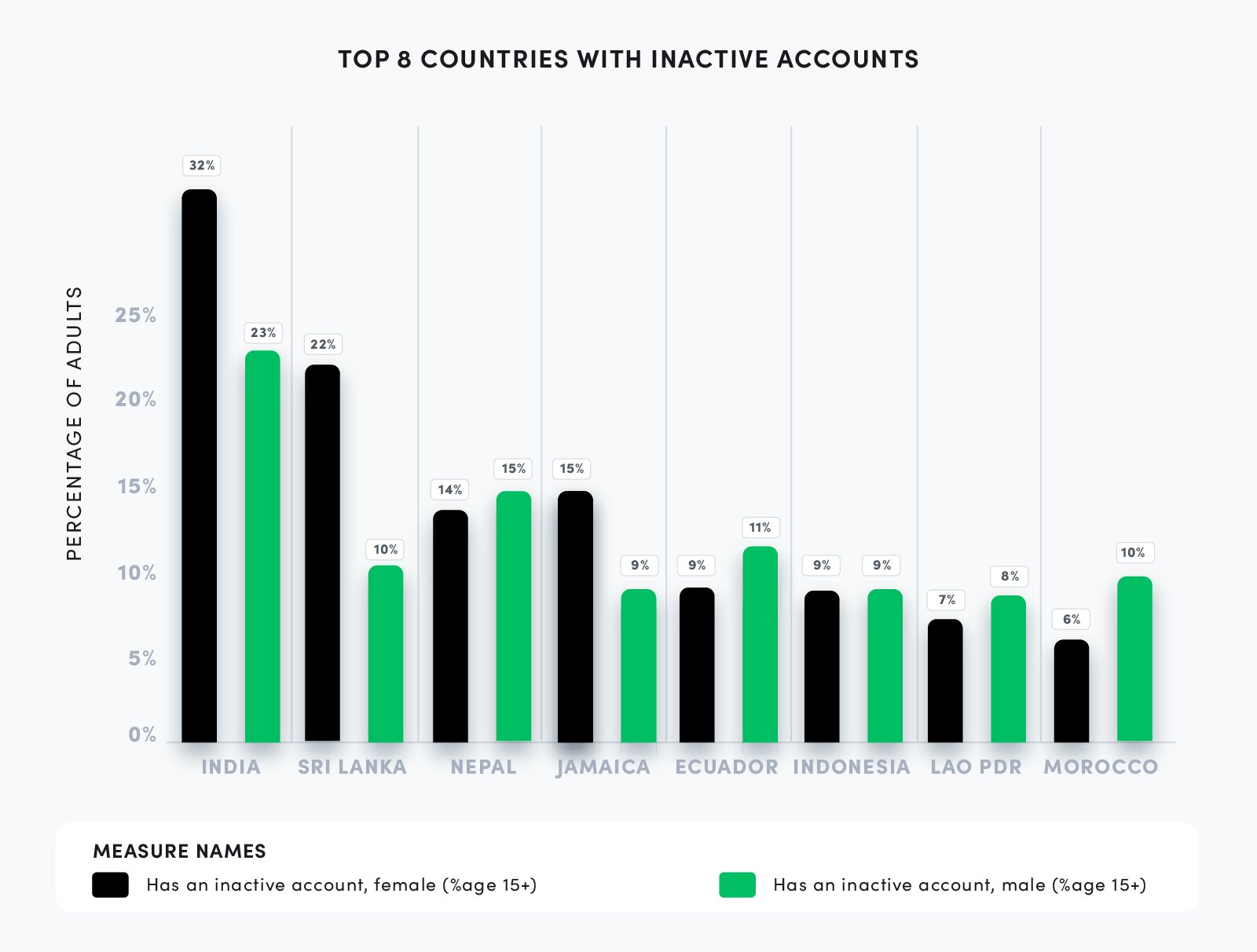 3  Redrawing the Global Map of Financially Unserved and Underserved

It is also important to consider that while the rate of exclusion and account inactivity are decreasing, the actual number of people in need of financial services is expanding in several countries due to population growth. Countries such as India, Indonesia, Pakistan, Nigeria, and Egypt show a decreasing rate of exclusion and inactive accounts, but because of the fast-growing population, the actual number of people being left out of the financial system has increased since 2017. 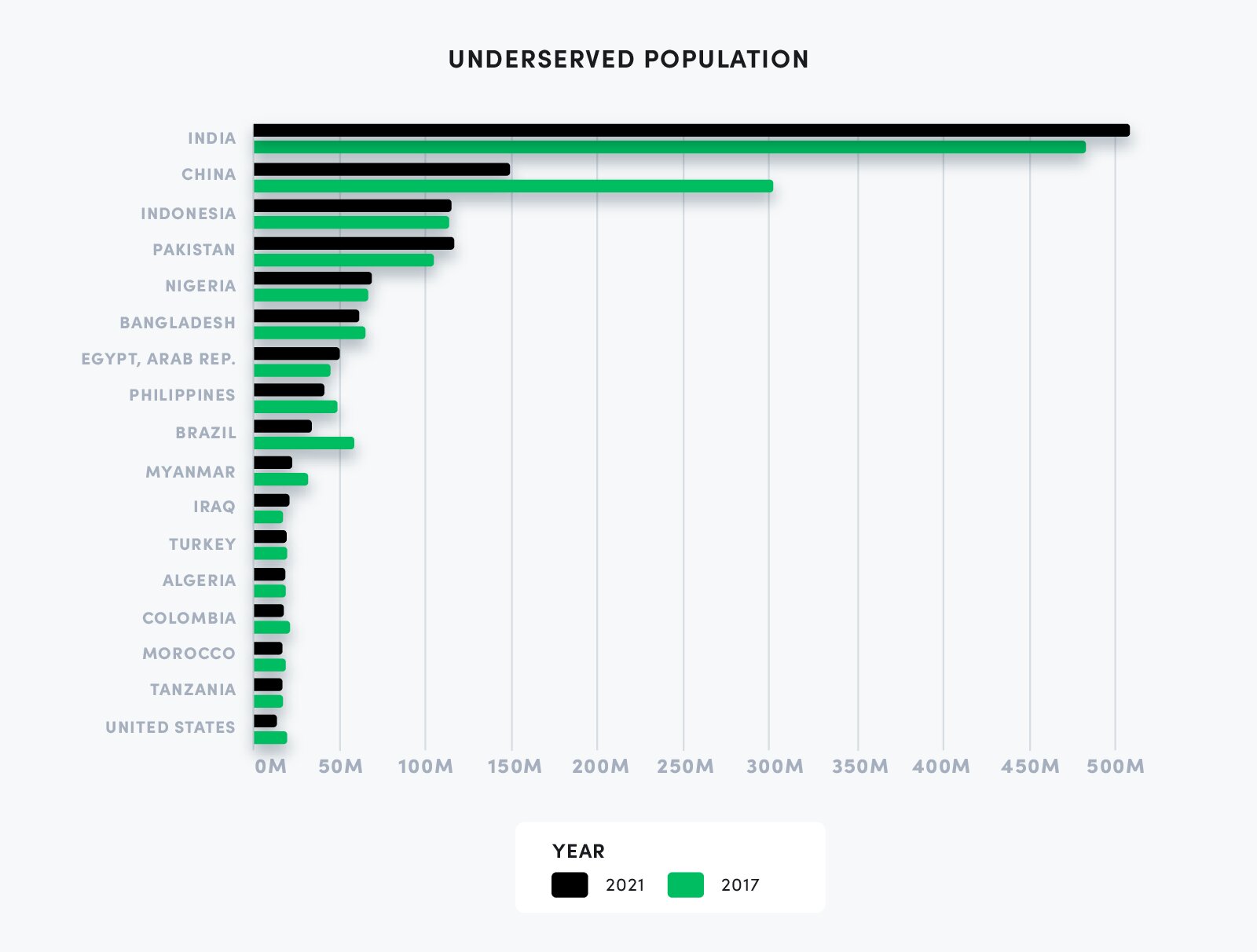 The cause for financial worries varies significantly between regions. The chart below shows that medical costs are the most common source of financial worry in developing economies – 36 percent compared to 23 percent in high-income economies. In Sub-Saharan Africa, education fees are a very common source of financial worry (29 percent) – almost twice the developing country average. In Latin America and The Caribbean, many households worry about paying monthly expenses (25 percent). In contrast, the most worrying financial issue in high-income economies is money for old age. 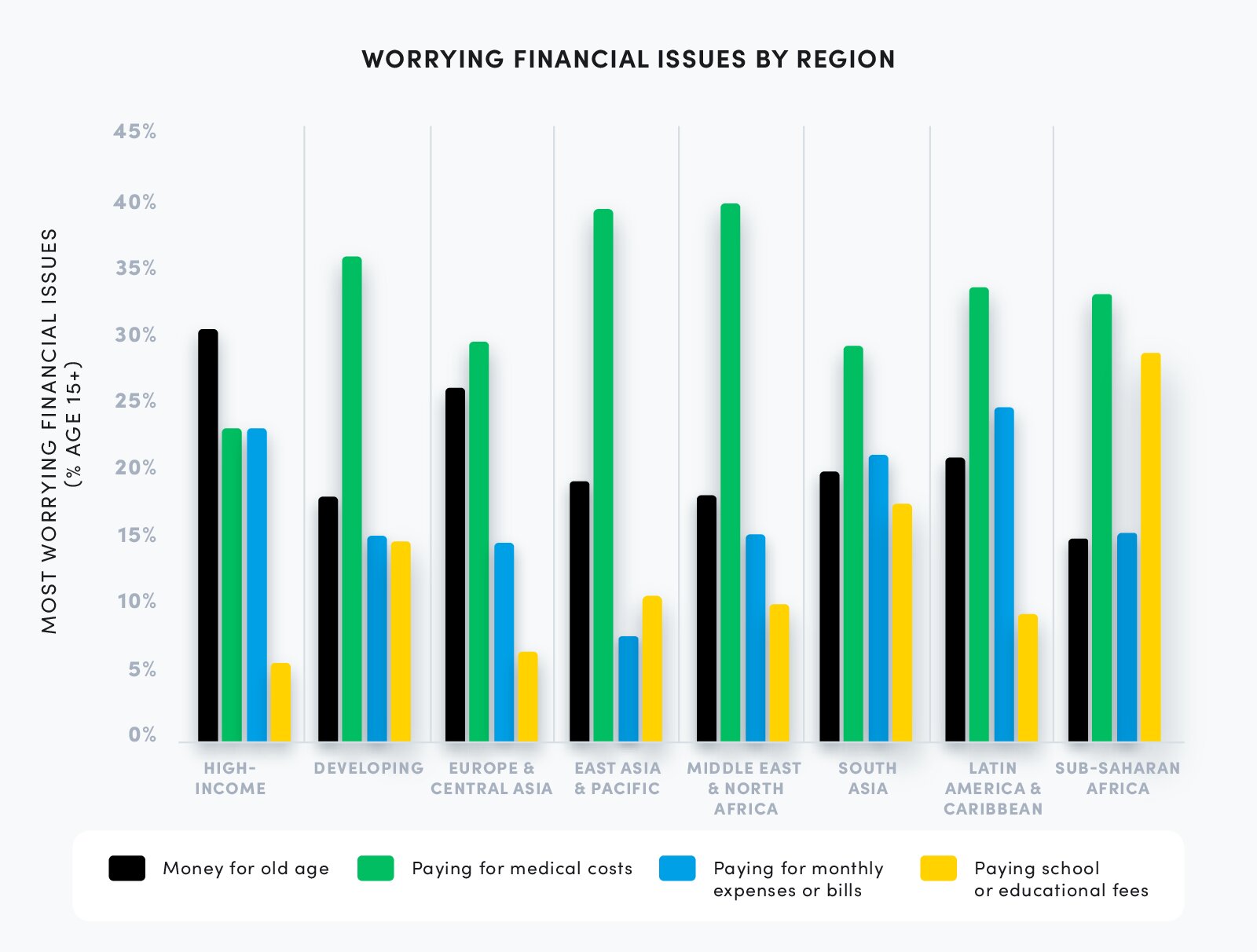 The 2021 Findex also points to a huge gap between developing and high-income economies with regards to financial resilience. While 79 percent of adults in high-income economies can access emergency funds within 30 days without much difficulty, this number is only 55 percent in developing economies. Five of the ten countries with the lowest percentage of adults who can easily come up with emergency funds are in Sub–Saharan Africa, revealing that the region still has significant work to do to build financial resilience. 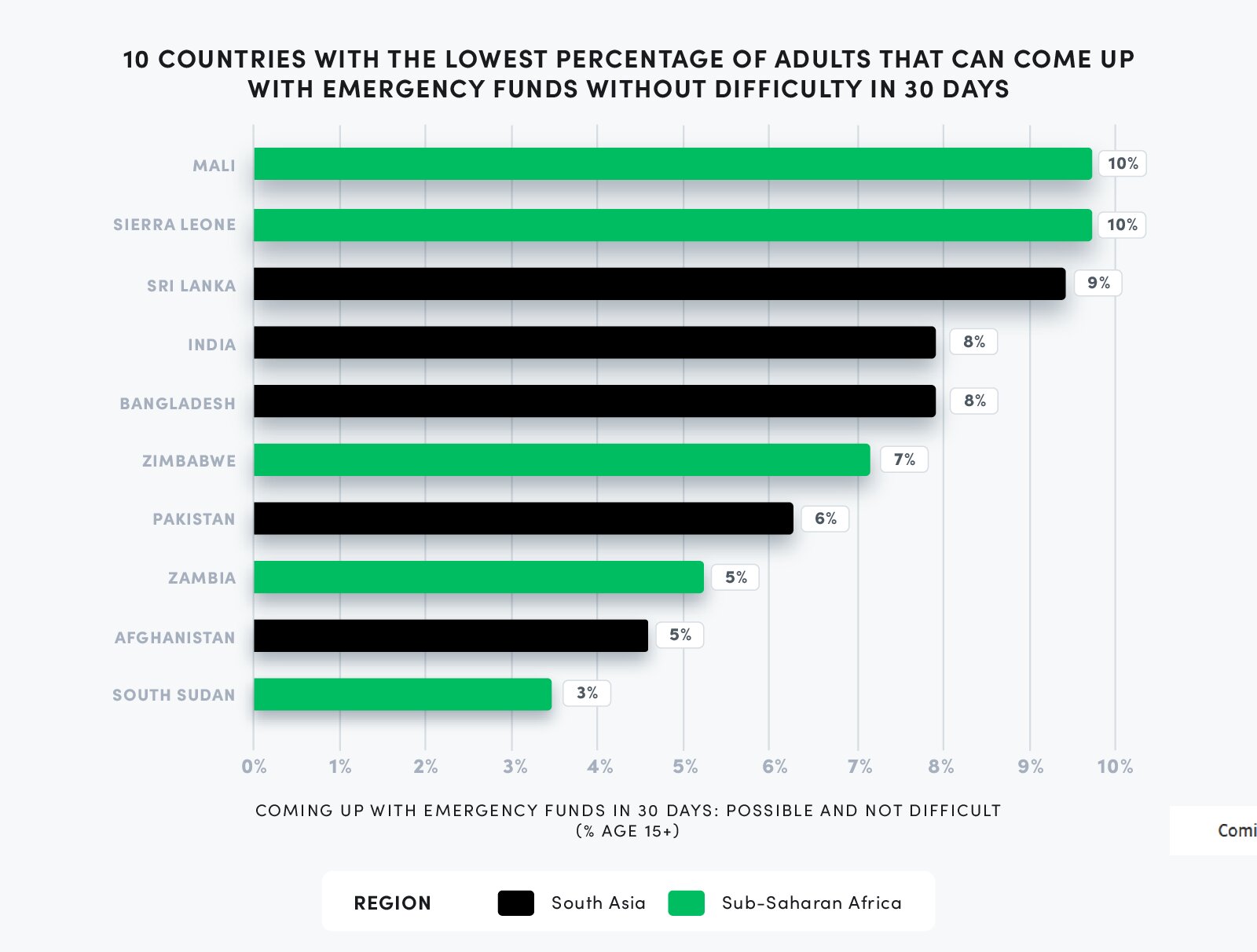 Looking Ahead: How the Next Global Findex Can Help Us Rethink Financial Inclusion

The Global Findex team at the World Bank gets many requests to add new indicators and new questions to the next reporting cycle and they must make difficult decisions on which indicators to prioritize. In our view, to remain relevant, the Findex should expand in at least two main directions:

It is important to know if people feel over-indebted, if they must forego medical expenses or meals because of loan repayments, and if they turn to selling assets to repay a loan.

Embedding Trust: The Potential of Privacy by Design for Inclusive Finance

Indian Financial Inclusion during COVID and Recovery: Public Policy to the Rescue