About a month ago, I participated in a webinar on the State of the Climate Action Report produced by the World Resource Institute. I was distressed by the magnitude of what needs to be done to delay the rapid warming of our planet which, unless halted, will soon make the world uninhabitable for the majority of people, and the speed of change necessary to reach some climate goals.

In particular, discussions related to diffusion theory – the non-linear progression of change when adopting new technologies typically depicted as an S-curve – were eye-openers. Adoption is expensive and limited to the few die-hard believers when a new technology is launched. But over time, as costs decline, there is an exponential growth in adoption, which eventually flattens out as adoption becomes universal. The adoption of electric vehicles is an apt case in point. 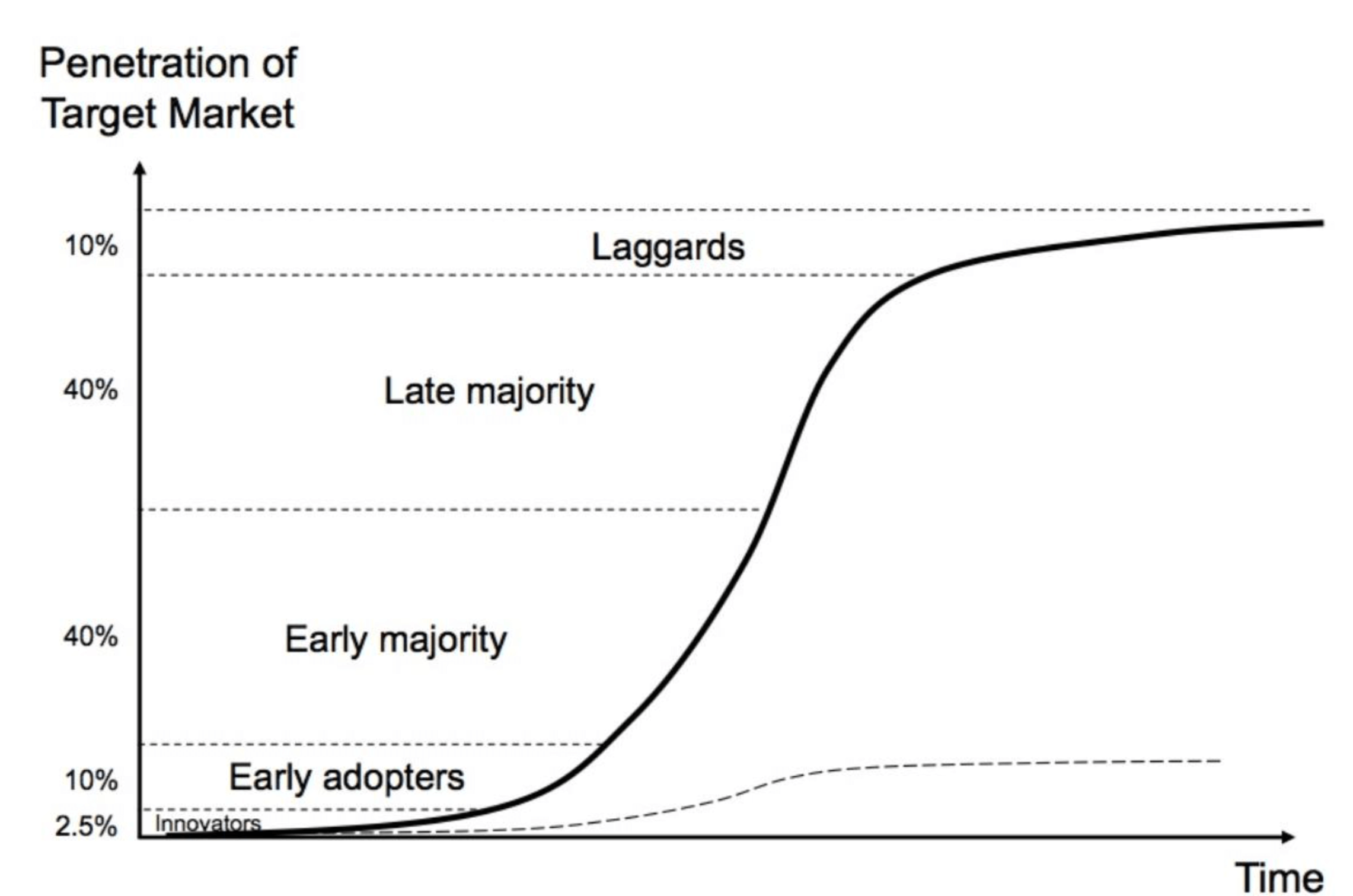 However, diffusion theory seems to apply to more than just technological adoption. In fact, to me, it’s also an explanation of how change happens in society: for example, how certain songs become popular, public health practices are adopted, and languages evolve.

A clear shift is happening in inclusive finance that resembles the latter stages of the S-curve.

As I reflect on this past year and where we are in inclusive finance, it is evident that a clear shift is happening that resembles the latter stages of the S-curve. Perhaps “mainstreaming” is the appropriate nomenclature in this case. While in its early days, the inclusive finance space comprised a closed group of select stakeholders who believed that the financial system needed to go beyond serving corporations and high-net-worth individuals, today there is near-universal consensus that financial and all systems – be it transportation, food, or financial services – need to be inclusive.

I see four trends in inclusive finance that are symbolic of this shift:

1. Customer adoption of DFS is accelerating at an exponential pace.

Country-focused research initiatives by various agencies have reported a clear acceleration of the rate of adoption of digital financial services, which is often the first step in onboarding a customer to the formal financial system. We hope that the next edition of the Findex, to be released in the first half of 2022, will provide representative and comparable data to substantiate this trend. The pandemic was a clear mobilizer, but government transfers of social payments using mobile money and other digital channels were pivotal in spurring the uptake of DFS among low-income marginalized communities.

GSMA’s State of the Industry report noted the marked global expansion of mobile money. There are now more than 1.2 billion registered mobile money accounts, with growth in 2020 twice as high as originally predicted. In other words, adoption is happening at an accelerated pace. Concurrently, the number of active users also increased exponentially. While it took a decade to reach the first 100 million active users, the next five years saw an increase to over 300 million active users – a milestone worth celebrating.

2. Large companies are adopting inclusive finance as a core business.

When Dan Schulman went to PayPal in 2014, he was one of the early adopters of financial inclusion, later announcing a shift to financial health in 2019 for PayPal’s overall vision. For most other large financial services companies, inclusive finance was at most a part of their corporate social responsibility (CSR) function.

Today, most financial services companies have inclusive finance as their core business.

Similarly, Mastercard’s core business is about serving small businesses everywhere. To achieve this lofty goal, they are structuring partnerships, testing new models, and solving pre-system-level problems through their institute, the Center for Inclusive Growth. But these partnerships go well beyond financial services companies. Corporations like Walmart, Cargill, Syngenta, and many others are re-imagining their value chains and embedding financial services in ways that allow them to reach previously excluded customers.

3. More startups are adopting inclusive finance as a core business.

It’s not just the large corporations. Inclusion is top of mind for early-stage fintechs, too. The Inclusive Fintech 50 (IF50), an initiative implemented by CFI and sponsored by Visa, MetLife Foundation, and Comic Relief/Jersey Overseas Aid in partnership with IFC and Accion, was launched in 2019. Each year thousands of fintechs globally submit their data to be considered for the competition. Even as the process has become more rigorous each year, with requirements to provide evidence and substantiate approaches that reach underserved segments, the sheer number of early-stage fintechs that participate gives a glimpse of what’s happening in the broader fintech space. The 2021 competition uncovered incredible fintechs providing an array of services to underserved populations, many of which directly supported low-income customers to survive and recover from the pandemic.

For instance, during the pandemic, the Mexican neo-bank Bankaya deployed agents at retail points such as supermarkets to educate potential customers on Bankaya’s digital savings products. Within nine months of their launch, Bankaya reached over 132,000 customers, 52 percent of whom are women. Colombian fintech Avista has been leveraging its AI-driven, internal credit scoring algorithm to provide credit to financially underserved pensioners. Others such as ThriveAgric in Nigeria and SASA Solutions in South Africa are helping smallholder farmers gain access to information and financial services via their platform, while Tugende is providing asset financing and helping Ugandan micro-entrepreneurs build credit scores, digital profiles and avail other services like life insurance and safe riding training.

4. Even tangential businesses are staking claims to inclusive finance.

Perhaps not as clear-cut as the previously cited examples is the emergence of complex financial products, like cryptocurrencies, using inclusion as their raison d’etre. While these solutions may eventually solve an inclusion problem by allowing someone to transfer money between jurisdictions at relatively low rates, they still have a long way to go. Many of the reasons that prevent low-income people from joining the digital economy – lack of identification, limited access to smartphones, cost of data, to name a few – are not addressed by cryptocurrencies. Yet, these companies see it as important to support their work by adopting the language of inclusion.

Still Early on the Curve

The diffusion of things that are good for people and society is undeniably desirable. A large number of people today are benefitting from increased access to financial services. But how do we guarantee the benefits received are improving the livelihoods of consumers? A decade of asking people to report on their practices and validating them through independent certifications has not done enough to diffuse good practices. We still see sub-standard practices that are harmful to low-income clients, even among institutions that are thought to have sound policies.

If inclusion is everything, then it’s no longer anything.

We need to ensure that consumers are protected. We need to guarantee that financial services address consumers’ livelihood needs and do not create a vicious cycle of indebtedness or hide costs in a convoluted pricing model where consumers are unable to understand or compare services. We need to go beyond payments services and prioritize financial services that enable investments in livelihoods and create opportunities to increase income. We need transparency and more data that helps investors, researchers, and consumers differentiate the charlatans peddling snake oil from those offering quality services.

Perhaps one place to start is coming up with a new name. If inclusion is everything, then it’s no longer anything. What should the next chapter of inclusive finance be called? Send us your creative solutions, and together let’s start the work on the diffusion of positive impact together.

“We need to ensure that consumers are protected. We need to guarantee that financial services address consumers’ livelihood needs and do not create a vicious cycle of indebtedness or hide costs in a convoluted pricing model where consumers are unable to understand or compare services.”

It’s a Time to Be Brave and Bold: Q & A with David Ferrand, CFI Advisory Council Member

Mergers and Acquisitions in Pandemic Recovery: What MFI Leadership Should Know

Strengthening a PACT for Resilience: A Behind-the-Scenes Look at Investors