Including Women in “Inclusive Fintech”

Five observations, from data on early-stage fintechs, that shed light on current gender disparities in the fintech industry.

Fintech startups have leveraged technology to lower transaction costs and reach underserved populations. These technologies can expand financial services to women, who are often excluded from formal financial services. The COVID-19 pandemic makes it even more critical to address gender equity, as evidence indicates women have been disproportionately impacted by the economic impacts of the virus. While fintechs can play an important role in designing accessible and meaningful solutions for marginalized populations, they can also run the risk of exacerbating the digital divide, including the mobile gender gap.

This two-part blog post explores data from Inclusive Fintech 50 and Results of the Fintech Benchmarks Proof-of-Concept to shed light on current gender disparities in the fintech industry – both at the management level and in their customer base. We provide initial insights and recommendations for investors and fintechs on overcoming some of these challenges. We hope the research community digs deeper into the disparities we highlight to understand the nuanced and sometimes intertwined barriers that female founders face, as well as how fintechs can serve the needs and preferences of female clients.

In this first post, we will focus on the first point. Below are five broad observations.

1. Women are underrepresented among fintech CEOs and founders.

Female-founded companies are traditionally underrepresented in venture capital funding, and the fintech industry is no exception. In 2019, companies with a female CEO represented 11 percent of all venture capital deals made globally (this increases to 20 percent if a female founder is included). However, only 7 percent of fintech VC deals had a woman in a CEO position.

Women are particularly underrepresented in fintechs founded in certain regions.

The 2019 Inclusive Fintech 50 data present a similar trend: 19 percent of the 400 applicants are female led, as defined by at least one female founder or executive. Women are particularly underrepresented in fintechs founded in certain regions – Middle East and North Africa (MENA) has the lowest share of female-led fintechs (only 8 percent), while Latin America and Caribbean and Sub-Saharan Africa stand marginally better at 15 percent and 11 percent, respectively. Furthermore, the data does not examine founders by country of origin, and female founders from developing countries may face unique barriers. As one female fintech founder from Sub-Saharan Africa explained: “A lot of the funding goes to foreign male founders. That’s one of the biggest challenges.” 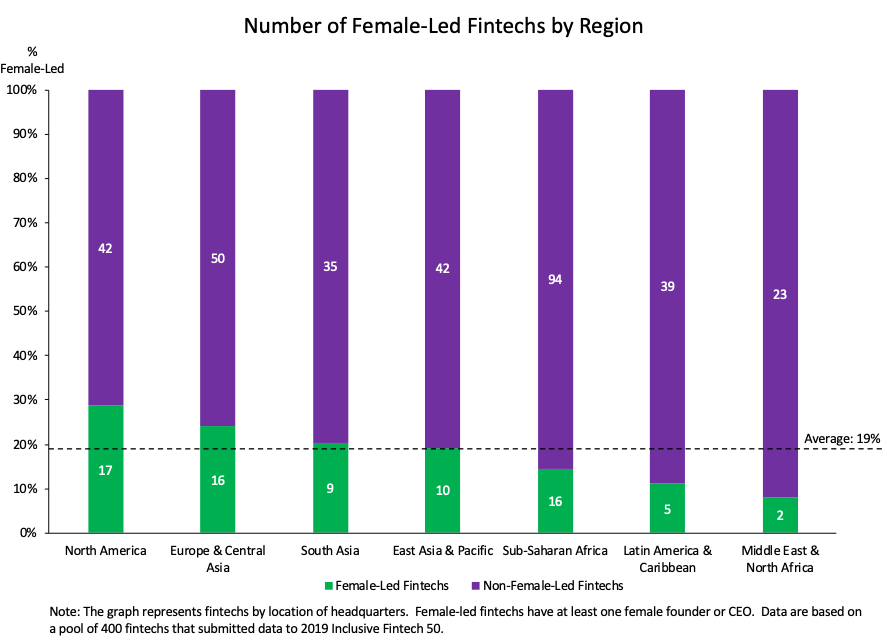 It’s important to put this data in the broader context of women’s representation in the workforce. Financial services have long been dominated by men. There is a misconception and unconscious bias that women do “better” in roles like HR, marketing and implementation versus strategy and innovation. For instance, according the World Economic Forum, women make up about 26 percent of workers in data and AI roles, 15 percent in engineering roles and 12 percent in cloud computing roles, compared to 40 percent in marketing, 37 percent in sales, and 35 percent in product development.

It’s also no secret that women – particularly women of color – are underrepresented in educational programs, like MBAs, that can provide them a stepping stone into the financial services industry. While 2019 saw an increase in the number of female MBA applicants, socio-cultural values and norms can influence a woman’s ability and decision to attend higher educational programs. Programs like Girls who Code and Girls in Tech are working towards eliminating the gender gap in technology and recruiting/encouraging young women to enter the tech industry.

2. Female-led fintechs generate higher revenues than those without women in leadership positions.

The 2019 Inclusive Fintech 50 data did not survey fintechs on revenue per customer, but preliminary evidence from the Fintech Benchmarks Proof-of-Concept reveals that female-led fintechs generate higher revenues. Among the sample of 45 fintechs, female-led ones had nearly three times the revenue per customer of non-female-led fintechs, but also three times the cost per customer. This year’s Inclusive Fintech 50 data will examine whether this trend holds true in a larger sample.

Among the sample of 45 fintechs, female-led ones had nearly three times the revenue per customer.

These findings add to the evidence of the strong relative performance of female-led fintechs, and are consistent with research across sectors demonstrating the revenue potential of female-led companies. For example, research from BCG finds that female-founded startups generate 10 percent higher revenue than their male peers over a five-year period. Similarly, a study of 3,000 top global companies by Credit Suisse shows that female leadership is associated with higher profitability and superior financial returns.

3. Female-led fintechs are able to raise funds at similar rates to their counterparts, but disparities persist in certain regions, namely, those with wide financial inclusion gender gaps.

The BCG study also revealed that female-founded startups raise less than half of what male-founded startups raise. A Harvard Business Review piece echoes the same conclusion – female founders are asked more challenging and skeptical questions during pitches, which leads to lower funding. This practice may be traced back to the stereotypes women face of not being the “right fit” for the role/sector.

The data from Inclusive Fintech 50 presents a more optimistic picture. At the median, female-led inclusive fintechs raise 24 percent more than non-female-led startups. This trend is largely driven by funding in formal investment rounds, echoing research in the U.S. from the Center for American Entrepreneurship that once a female-founded startup is funded, it receives similar funding to male-founded startups in additional fundraising rounds. 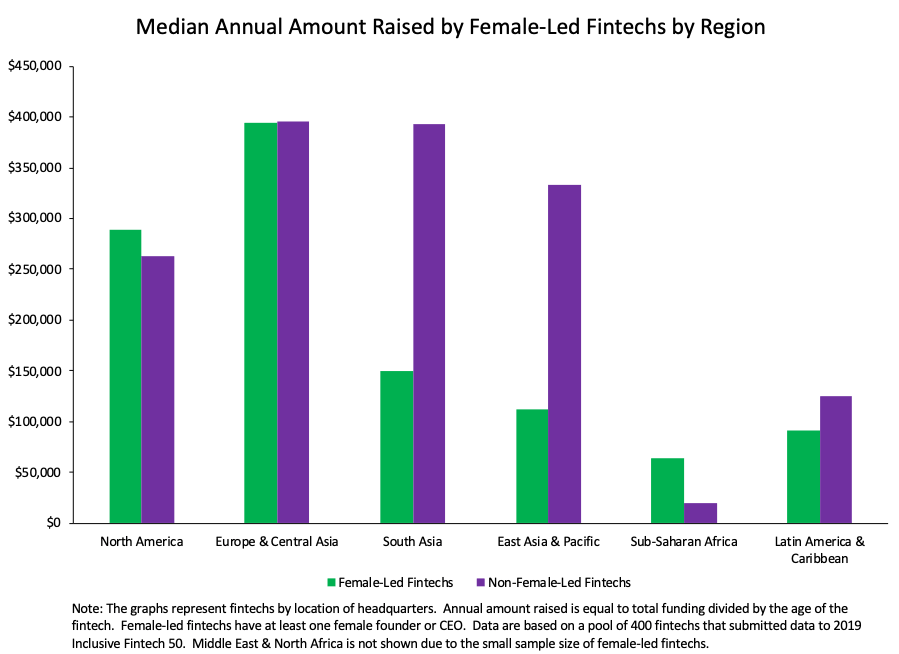 Perhaps it is not surprising that these regions also have a large gender gap in broader financial inclusion. For instance, the gender gap in mobile money usage is 25 percent in Latin America, 21 percent in East Asia and Pacific, and 75 percent in South Asia. In these regions, the same regulations and social norms that prevent women from opening bank accounts may also provide additional hurdles for female entrepreneurship in a male-dominated industry.

4. Female-led fintechs have less funds available to get started, but receive a boost from angel investors. 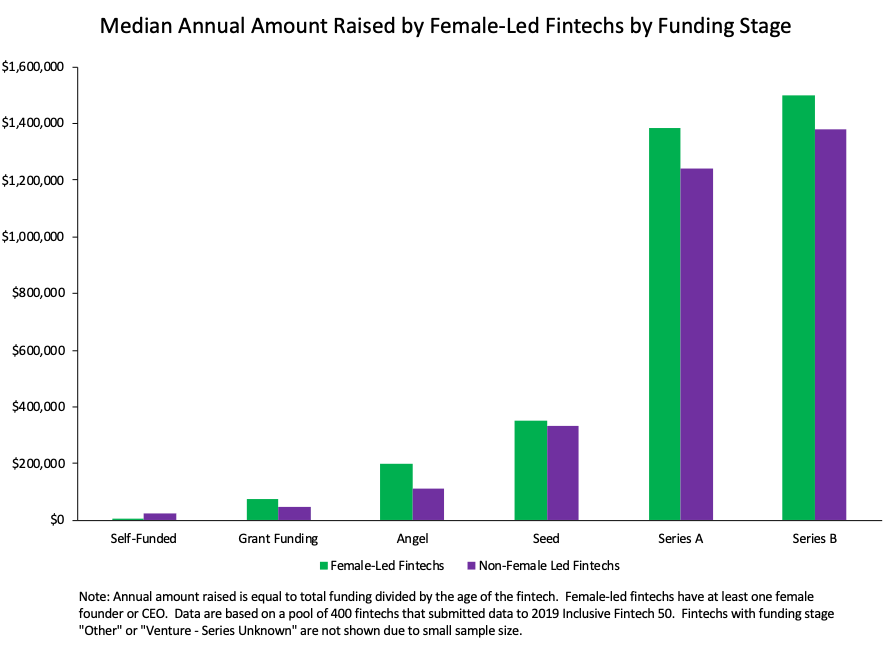 These findings are consistent with a study by Goldman Sachs that found that female entrepreneurs in emerging markets often do not seek external financing due to challenges of navigating the process or perceptions of likelihood of success.

5. The network effect is weaker for female-led fintechs.

Fintechs that are “networked” – part of a fintech hub, incubator, accelerator, or award – raise more funding than non-networked fintechs. However, female-led fintechs managed to raise only 8 percent more if they were networked. Meanwhile non-female-led fintechs raised 43 percent more if they were networked. This trend is consistent with a report which found that accelerators widen the equity financing gap, with male-led startups experiencing a 2.6 times increase in funding raised post-acceleration relative to female-led startups.

Female-led fintechs managed to raise only 8 percent more if they were networked. 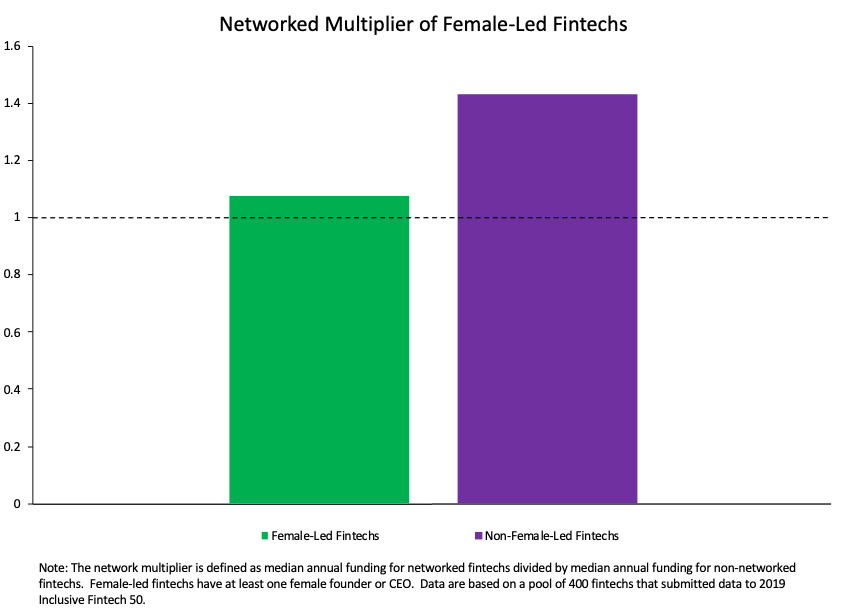 Be on the lookout for the next post, when we will discuss how fintechs may be able to close the gender gap in financial inclusion for their users.