A review of five surveys, including CFI’s first wave of data on MSMEs in Lagos, reveals consistent evidence of significant reductions in earning ability and capacity to cope.

Test of a Lifetime: COVID-19 and Financial Inclusion

COVID-19 and MSMEs: Data and Analysis to Understand Impact, Test of a Lifetime: COVID-19 and Financial Inclusion

Data from across the financial inclusion industry shows the economic upheaval COVID-19 is causing throughout Nigeria. In addition to data collected by CFI, we examined the results of four other surveys of COVID-19’s impact throughout the country. When considered collectively, the data tells a story in which the public health crisis has led to policies which slowed economic activity. Consequently, income has declined—for employers and employees alike—and there appears to be massive reductions in available work. The data also suggests Nigerians’ capacity to respond is finite as households draw down savings and struggle to repay debts, exacerbating their struggle to put enough food on the table.

CFI looked at five surveys that have been conducted since COVID-19 reached Nigeria. A summary of those surveys—including sample size, notes on sampling method, survey dates, and major topics covered—is available in Table 1.

There are three things to highlight about this set of surveys which are meaningful when interpreting the results. First, the survey methods used varied, and these different modes have shown to yield different responses to the same question in other studies. BFA used an online survey, GeoPoll’s survey was delivered via SMS to its database of respondents while CFI, i2i, and the World Bank conducted surveys by phone.

Second, the samples target different populations of interest and the selection methodology differed. BFA used a sample of paid, online respondents while GeoPoll relied on its database of mobile subscribers who tend to be younger, more literate, and wealthier than the population at large. CFI’s sample of MSMEs were clients of Accion Microfinance Bank in Lagos. Only i2i and the World Bank surveys were nationally representative. This diversity can help give confidence in patterns we identify: there is strong circumstantial evidence the trend is true if all five surveys show a similar trend with a similar magnitude. A downside, though, is that because of the heterogeneity in methods, circumstantial is the best we can do—this is not an empirical comparison.

Third, these surveys happened at proximate but not identical times. BFA’s survey was the earliest and the initial World Bank survey, which includes two waves, also happened shortly after the pandemic struck. i2i’s longitudinal survey was conducted during a two-and-a-half-month period. These differences are relevant because of the immediacy of COVID-19’s impact. Even differences of a few weeks could have had meaningful effects on responses. 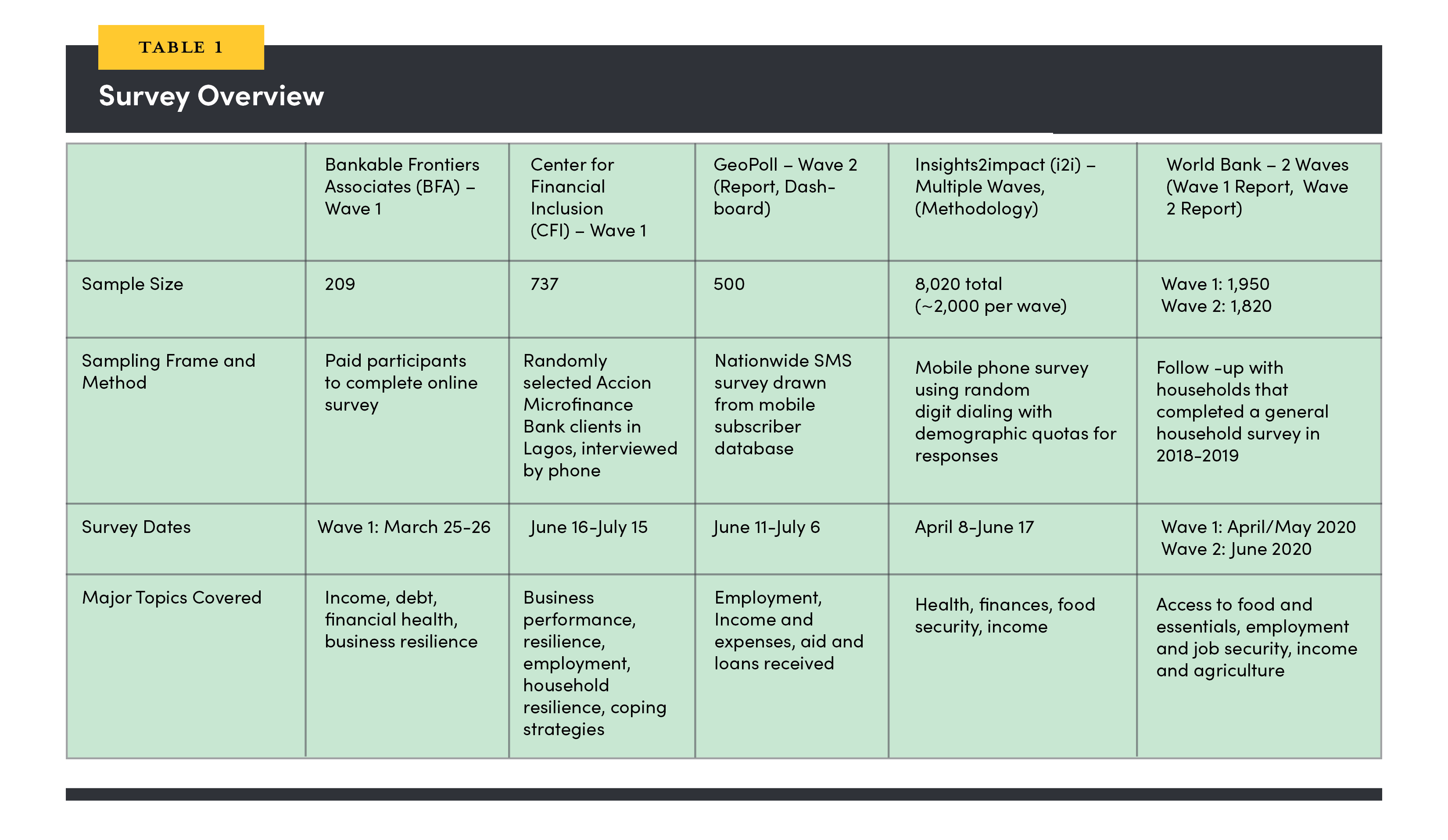 Restrictions on Movement Are Decimating the Job Market

CFI’s data showed that MSME owners were struggling in the face of pandemic restrictions. Profits had declined, they struggled to cover expenses, and employment had fallen by 51 percent. Nine percent of businesses in the CFI sample closed as a result of government restrictions or a drop in customer demand.

The other surveys that CFI examined showed similar trends in business performance, painting a picture of an expansive economic slowdown that has upended the livelihoods of nearly half the working population. For instance, BFA’s survey included 63 MSME owners, and 14 of them (22 percent) had also closed their business. Of those individuals that were employed by someone else or a sole proprietor before the pandemic in GeoPoll’s survey, 64 percent said COVID-19 prevented them from being able to work. According the World Bank 49 percent of people have had a period of unemployment since the pandemic started, but 55 percent of those had found work by June.

The fact that the slowdown seems largely related to policy as opposed to major changes in consumer behavior may benefit businesses and their employees. Respondents in the surveys reported a high degree of optimism about their future livelihoods. Two-thirds of those who had stopped working since the pandemic in the GeoPoll survey thought they would have a job to go back to once the restrictions were lifted, and most of the closed businesses in the CFI survey were confident they would reopen.

A Lack of Income-Generating Opportunities Is Leading to Food Insecurity

While there was a high degree of confidence that things would improve when restrictions are lifted, the data shows people struggling to cope with the economic impacts of the virus. In each survey, pluralities of respondents reported that their incomes had declined significantly. Their loss of income has made it hard to cover the costs of essentials. In the CFI survey, 56 percent of MSME owners reported not being able to cover their household expenses while in the GeoPoll data, 45 percent of respondents who were responsible for their households’ expenses said they could cover them for a month or less.

Individuals Are Drawing Down Finite Financial Resources to Cope

Individuals are using their financial tools to cope with the downturn, but the data shows they are rapidly drawing down their financial reserves. In late March, 31 percent of respondents in the BFA survey reported using emergency savings to cover expenses while another 42 percent reported not having emergency savings of any kind. In CFI’s July survey, 64 percent of business owners had reported making a savings withdrawal while only 28 percent reported making a deposit. In an i2i survey, 41 percent of respondents said savings was their source of emergency finance during the first week of April. In the survey during the second week of June, only 27 percent said that savings would be their primary source of funds. That trend was accompanied by an increase in the number of people who do not know where they would get money in an emergency.

The surveys do not offer much clarity on new borrowing. In i2i’s nationally representative survey, the share of people borrowing was very low, ranging between 18 percent in early April to 6 percent in June. The first wave of the World Bank’s survey found only 13 percent of respondents borrowing from friends and family. CFI’s survey found a quarter of respondents had borrowed since the pandemic while GeoPoll’s survey found half of respondents have borrowed to cover expenses since COVID-19. However, as mentioned previously, the different populations of interest and sample frames may explain these differences. The CFI sample contains business owners while GeoPoll’s methodology yields a slightly wealthier demographic. Both groups are more likely to have access to and use credit.

An inability or difficulty to repay existing loans is much clearer in the data. Seventy-four percent of BFA respondents who had loans anticipated not being able to pay down debt due to the pandemic and 55 percent of CFI respondents reported having already missed a loan payment. It is unknown from these surveys whether economic hardship, restrictions on movement, or moratoriums on repayments were the cause of these missed payments.

The results from these five surveys show extensive economic damage resulting from COVID-19. Income generating opportunities have eroded as the government has restricted movement and enforced closures. In turn, households have struggled to cover basic expenses and food insecurity appears to be widespread. Nigerians are using financial tools to help them cope, but there are limits to what these tools can offer as they draw down savings and struggle to repay or are unable to take on new debt. In the next blog examining the impact of COVID-19 in Nigeria, CFI will examine lessons from humanitarian crises as well as fiscal, monetary, and social policy levers that decisionmakers in Nigeria could use to help improve situation.

The CFI survey discussed in this post is part of our partnership with Mastercard Center for Inclusive Growth to understand the impact of COVID-19 on MSMEs.

10 Things to Know About Nigerian MSMEs’ Experience with COVID-19